For my final project this semester, I’ve decided to take a new spin on the type of subject I love most: cats! With the Pyeongchang Olympics taking place this year, I was in full-force ice skating mode, and I figured it might be kind of fun to take ice skaters and turn them into cats. There’s a certain type of gracefulness to ice skating that I think matches up well with the natural balance and languid athleticism of cats, but yet the idea of picturing cats trying to ice skate (or being willing to ice skate) is so unrealistic, it made me laugh just to think of it.

After a bit of wrestling with what exactly I wanted to do, I decided it would be fairly straightforward to just paint the three podium winners from the men’s event this season. Firstly, because I’m an enormous fan of what Yuzu, Javi, and Shoma are doing in their field as skaters and I haven’t been able to shut up about the Olympic men’s event for months, and secondly, because I thought their outfits would be hilarious to put on cats. And that’s what my work is largely about–the juxtaposition of semi-realism and humor.

So, my first painting became the gold medal winner (and my favorite skater ever–I have an unrealistic amount of pictures of him in our apartment) Yuzuru Hanyu, and I decided to go for his short program outfit with the purple-tinged Olympic ice as the backdrop. I’d never painted ice before, so I was afraid I wouldn’t be able to get the texture correct. I ended up painting a thin, wet layer of light purple onto the canvas and slowly covering it in thick streaks of white paint to mirror the way the ice looked in all my reference images. It ended up being my favorite part of the painting, and I’m a little disappointed I ended up losing my process photos of that part of the image (I was having issues with phone space and had to delete several pictures without a chance to back them up).

The Yuzu cat himself proved to be a challenge, as it was extremely difficult to predict how a human outfit would fit to a cat’s body, but I did what I could to make the shirt folds and pants wrinkles match up. I’m pretty comfortable with how cat bodies work and function, since I spend all day with cats and paint quite a number of them, so I ended up improvising and I believe it turned out somewhat believable. For the skates themselves, I was able to just shrink human skates down to size and not worry so much about how cat paws would actually fit into them: I felt it added to the humor of the piece to do that instead of trying to design realistic cat skates. Even throughout my many struggles with the clothing, I believe I was able to balance out some of my problem areas by focusing on the cat anatomy, the detailing of the shirt sequins, and the jewelry as focal points that distracted from some of the more unrealistic human-to-cat clothing transportation.

Overall, I’m very excited with my final product, and excited to tackle the other two cats in the very near future. Now that I have a clear method for painting the ice and working with the cat anatomy to line up where the wrinkles in the clothing will go, I believe I will be able to find similar success in the other two works. I even plan on going a little further with my compositions, adding a spotlight on the ice for my next piece, and having a cat skating head-on towards the camera in the final piece. I am beyond excited to see these pieces all together once they are completed. 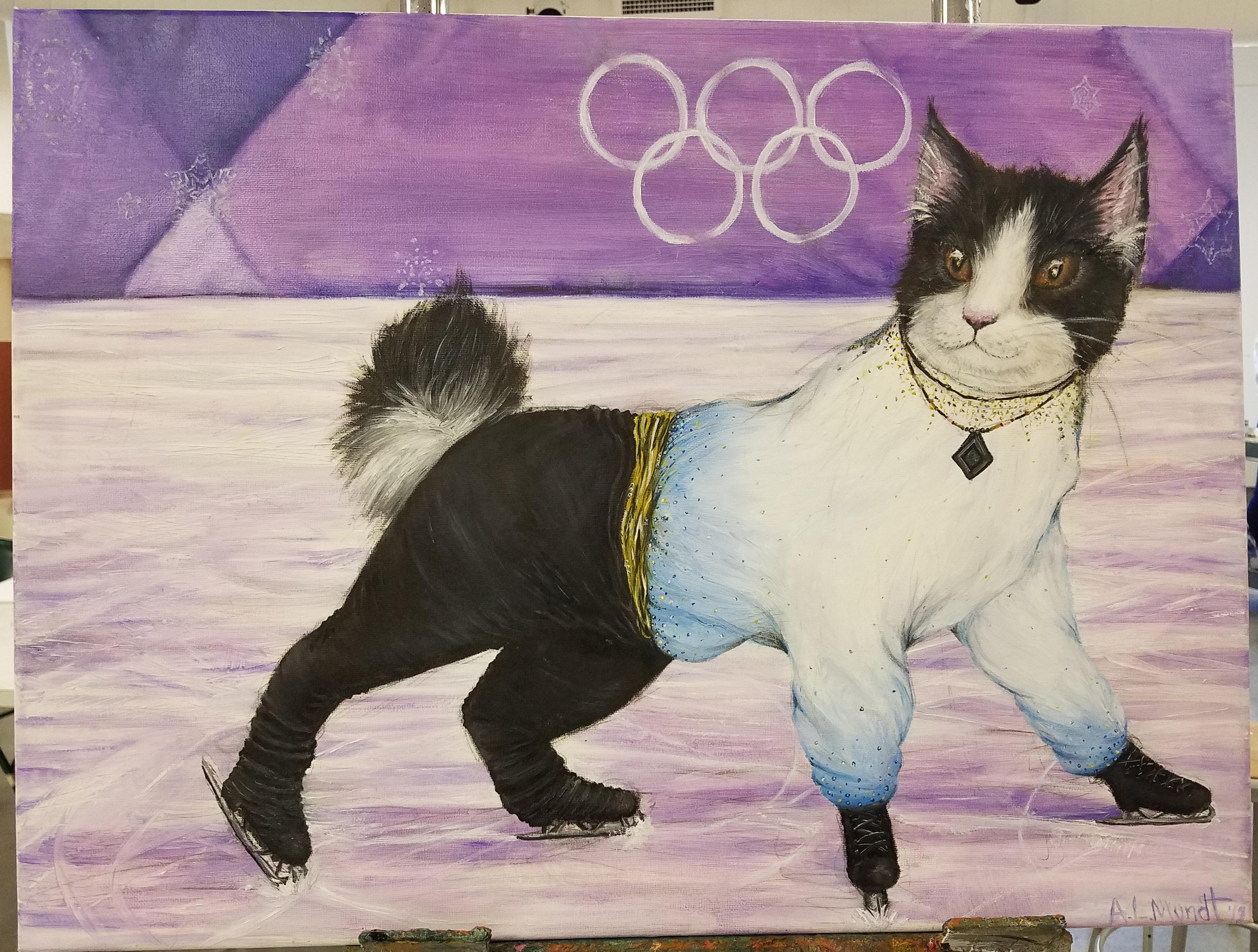 One Reply to “Final Project: Part 1”