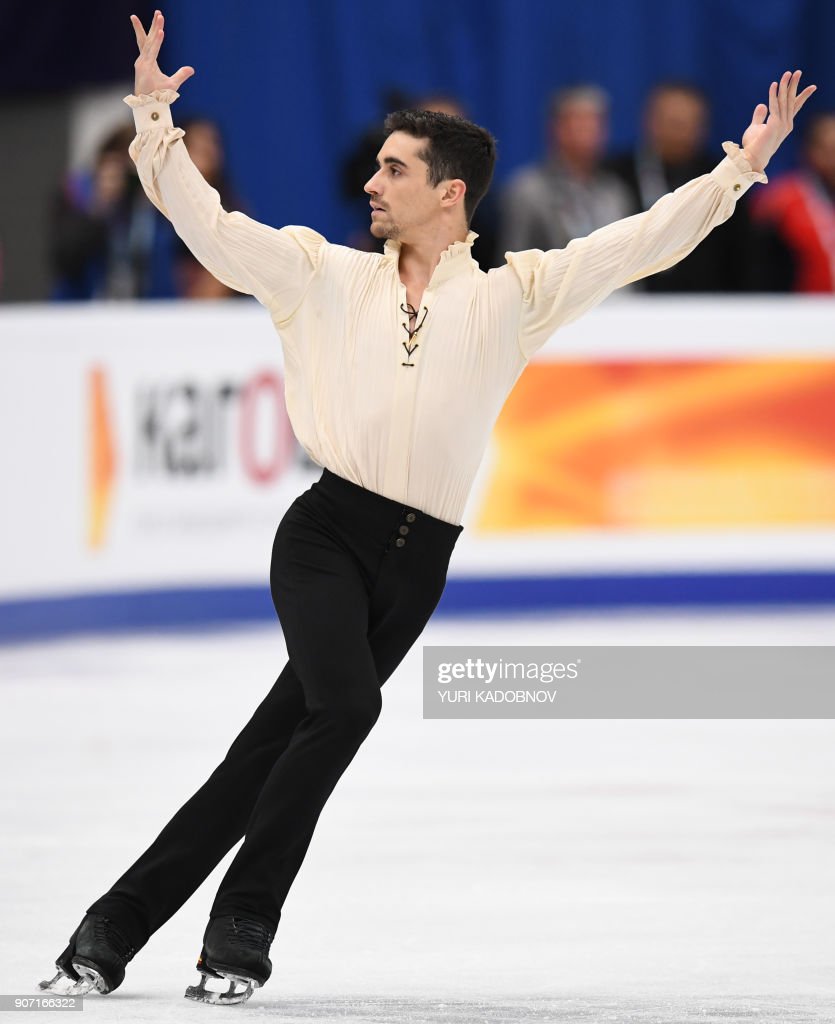 The last third of my skating cat extravaganza was, fittingly, the last third of the Olympic podium this year: Javier Fernandez of Spain. I knew going into this painting that I wouldn’t be able to have as much fun with the sequins (since there were none, unfortunately…) but I thought I could make up for it by switching up the composition for my final piece.

I decided to go vertical instead of horizontal,  but keeping the 16×24 canvas, because I liked the way the three same-sized canvases hung together on the wall, and I definitely wanted the three pieces to stay as a set. The main difference in this painting from the other two is that there is less of an orientation on the rink: no background boundary or spotlights. Just the ice. I was inspired by some pictures of skaters with a similar composition, where the photo is taken so that only the ice and the skater are visible. I thought that with the context of the other two, I didn’t have to reiterate the background a third time. With that, I used the same technique for the ice as with the other two paintings, and was once again pleased with how easy and effective it was. 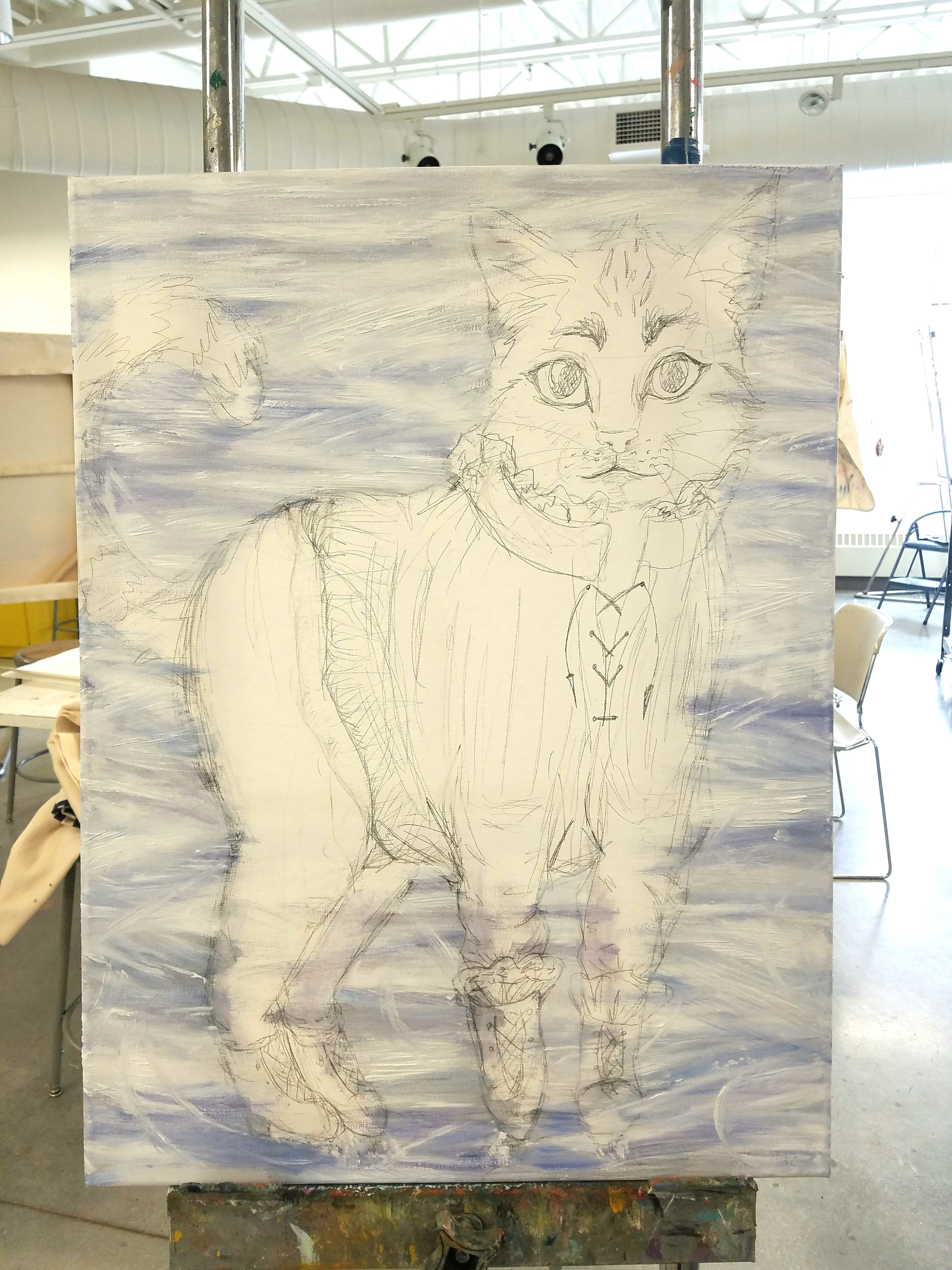 I feel I was also successful with Javi’s cat, the same way I was with Shoma’s. Being able to work with different stripes, patterns, and shades of fur on the cat face is what allows me to really be able to make the texture as realistic as possible. I had fun playing with the color to get it to synthesize with the background and the future creamy color of the shirt, and especially enjoyed giving Javi-cat his eyebrows–I thought he’d be more recognizable with them on, and I think it worked out well. 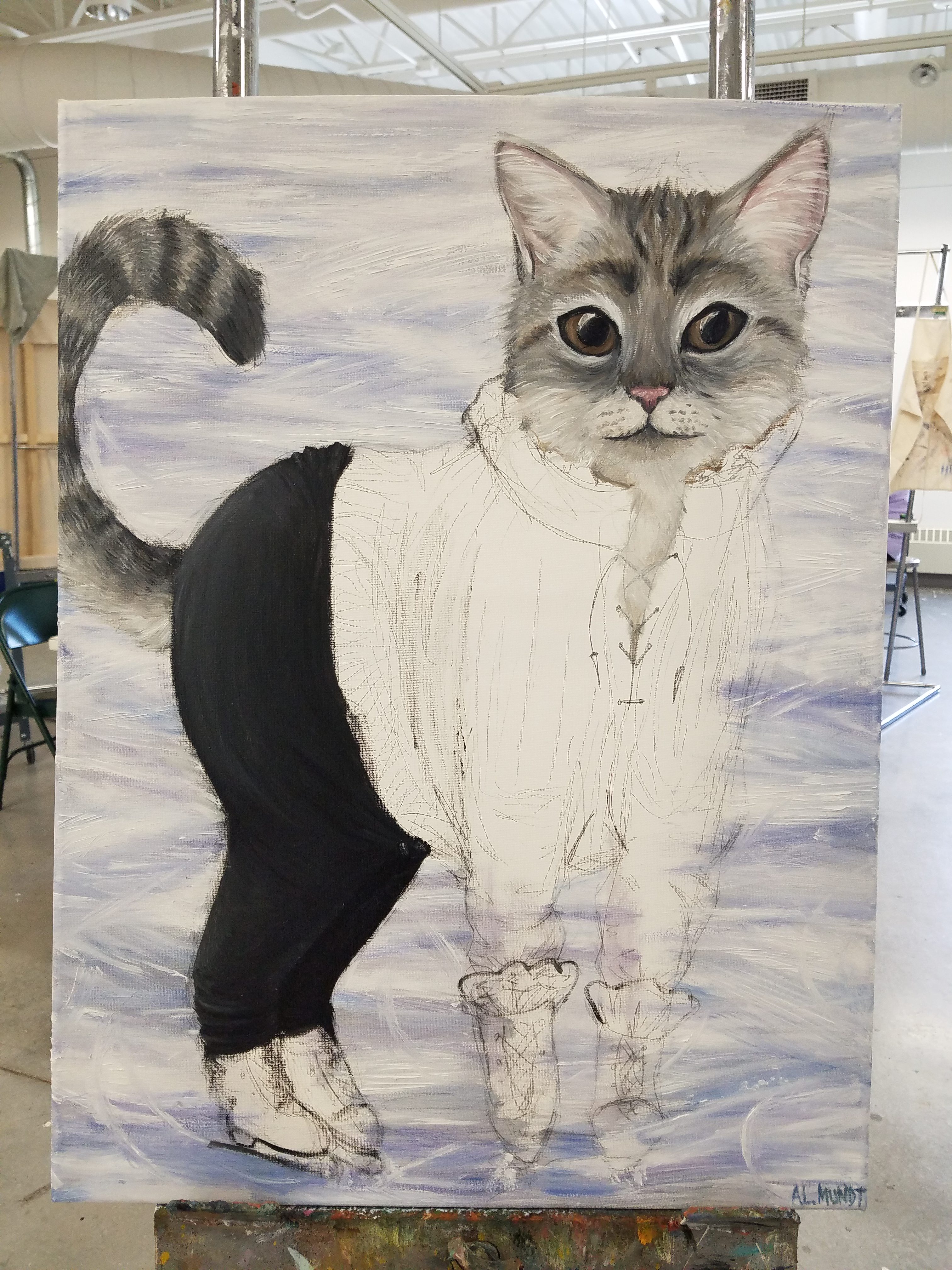 The real challenge with this piece was the shirt. As I mentioned before, there were no sequins to hide my amateur fabric-rendering skills behind. Not this time. I was forced to really buckle down and think of how the fabric would behave on a cat standing in this weird pivoting position. I knew the crease between the front legs and the back/stomach would have to be dark in order to give it the perspective and depth of the turning cat, but I’m still not sure I like the way that turned out, even now. I also had some issues with the space between the front legs, since it looked strange dark and it looked strange flat over his chest. In the end, I decided to take the real seams from the costume, two lines that went down the front of the shirt, and put them in from memory so that the shirt could maintain a shape that sort of made sense.

Whether or not that was successful, I am nevertheless satisfied with this piece, and with the series as a whole. Painting these skating cats was something I set out to do almost as a joke, a little “what if” that I laughed about, but the series grew into itself along the way and became unified, funny, and significant to me all at the same time. It’s not every day you get to combine so many things you love into one project, and actually be happy with the end result. I think what is most successful about these pieces to me, besides what I have said in past posts about the juxtaposition of precision and humor, is that I don’t particularly like any of the pieces more than the other. There are nice areas in all three of them, and bits I would change in all three as well–which means that when I look at the three of them all together, it’s a unified sense of completion and progress. And that’s the way it was in the Olympic competition this year, anyway, for our podium winners: everyone had different areas weaker and stronger than their competitors, but each program, each piece, is a success in its own right. I am very glad I was able to go on this journey and close out my semester with these three paintings. 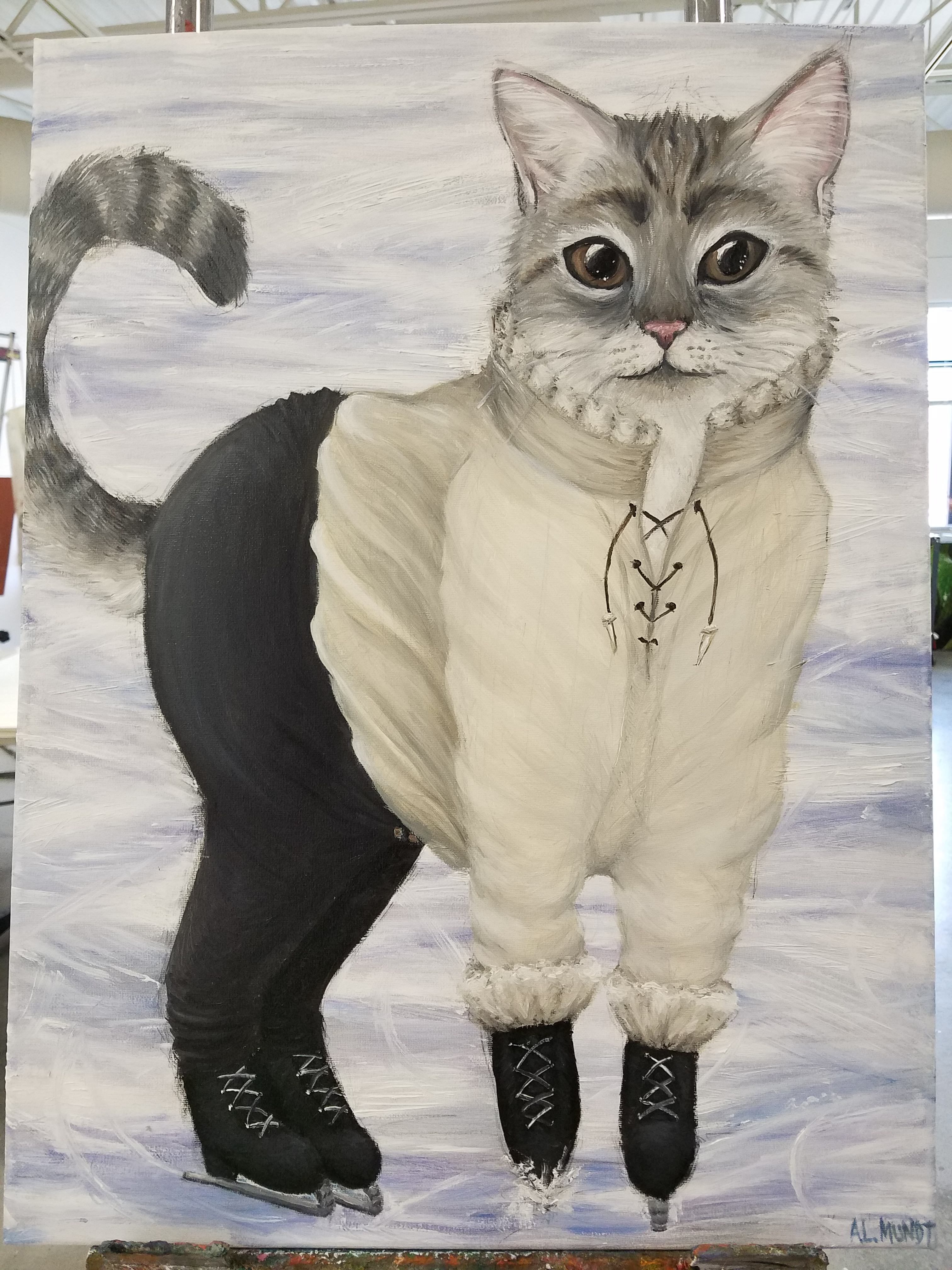 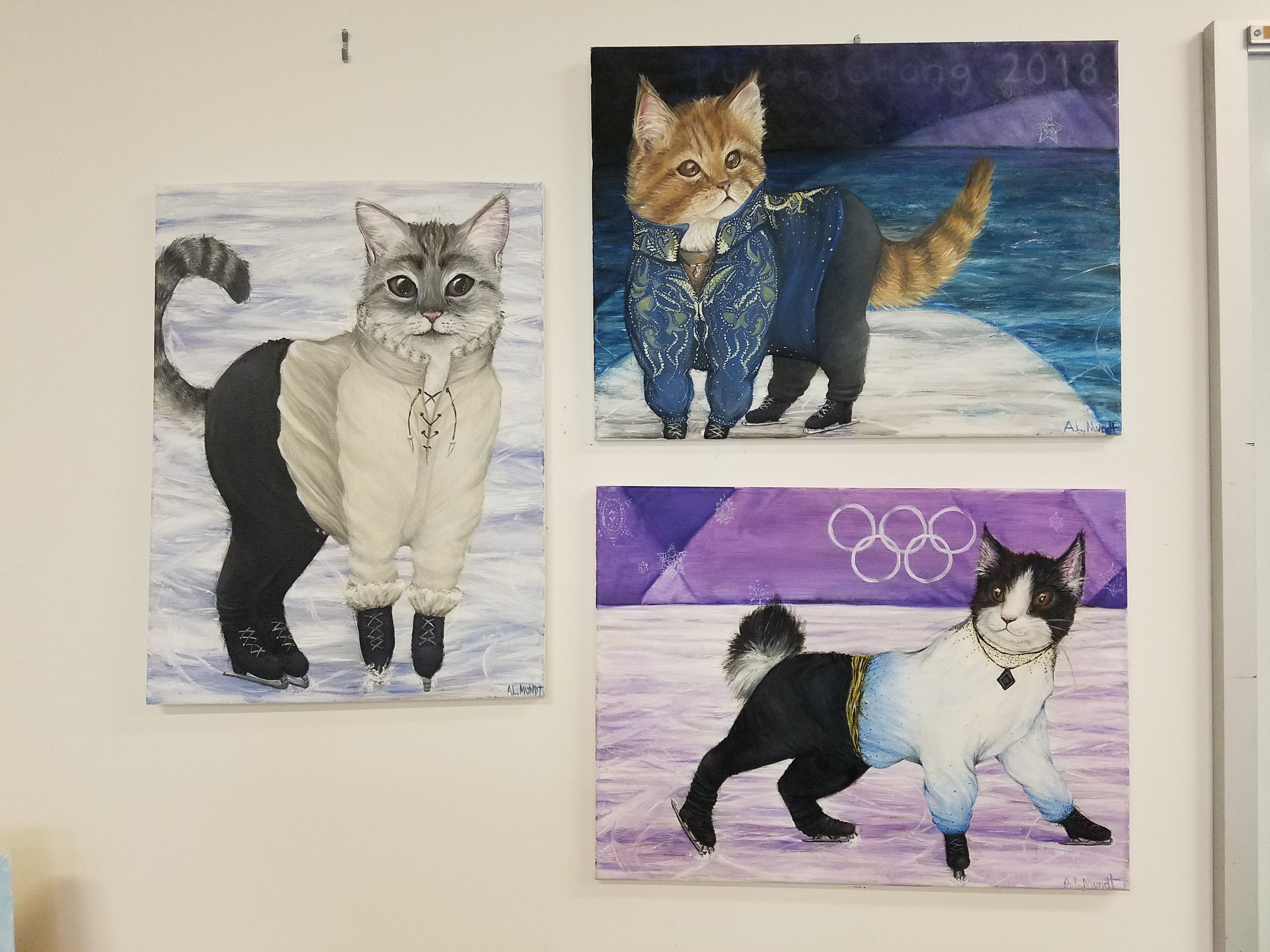