And so the journey begins–an intermediate painting class and its first assignment. “Making Meaning” was about pulling inspiration from the shelves of the geology department, fusing science with artistry until there was no way to tell where one ended and the other began. In truth, science and art are the same, just two sides of a mirror that reflects one image. With this assignment, I asked–“what are we made of? Art? Science?”

This idea exploded to life when I saw the scientific objects we had to look at: gems, geodes, skulls, minerals coagulated into prismatic lines and shapes. I thought, again, “what are we made of? What is our universe made of?” I was particularly inspired by these sections of minerals below, and the shapes of the skulls. Under our skin, we are bleached bone, but what if we weren’t? What if we were these radiant crystals in shades of earth and sky and sea and flame? 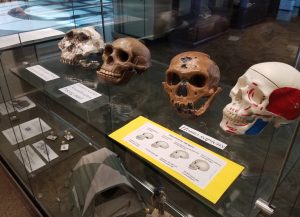 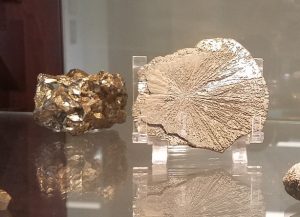 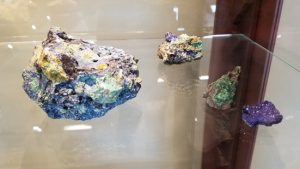 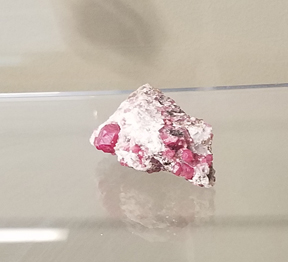 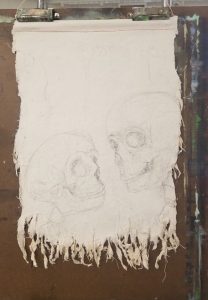 This became the premise for my first painting. I wanted to paint skulls observing each other, skulls made of rocks and gems, with a gem-like sky as well. I knew I had no talent for painting rocks and minerals, so I feared early on that this was not going to be a very realistic project–but I figured I would go for it anyway. The work became a shredded piece of Gesso-ed canvas that represented “the fabric of life” like a Cotton commercial, and the more I painted it, the more it started to look like a parody of a pirate flag. But I did not mind this. In fact, I liked it.

However, my affinity for the design and inspiration didn’t last me long–I tend to have the sort of painting process that leaves me frustrated and despising my work for the middle of the journey. The beginning turns out fine, the end usually turns out fine, but the middle? I’m just simply never satisfied. For this painting, I think my problem was that I like to use very thick gobs of paint on my brush when I work wet into wet, and this results in it being difficult for me to produce fine details on a smaller scale. I love the way the gem colors turned out, and the composition of their forms, but the detail work just isn’t as accurate as I would like it to be. I wanted this work to be flag-sized from the start, but I think if I could do it over again, I would start with a canvas twice as big so that I might have a chance to work on the rock formations in a more realistic way.

Thus, I struggled through a lot of areas, realizing once more that there was not going to be a lot of “realism” here between the blues and greens and golds of my skull heads. This agitated me for a while, since it was confirmation of fears I had in the beginning, but once both skull heads were complete, the similarity in style seemed to make up for it. After all, they looked rather normal for my style: blended background, bumpy figures, nothing as precise as it could be. That sort of thing is perfect for painting furs or abstract fuzzy foliage, but even though I’m relatively satisfied with the results of this skull-and-gem work, I’ve decided it’s not the best for precise geometric figures. I suppose I’ve put my own style on math and science through working on this piece, and answered the question of “what is my style made of?” alongside painting about what we as a whole human race might be made of–which is one victory. I’m not perfectly happy with this end product, but for me, painting things that aren’t cats is kind of like eating your vegetables, I suppose; you have to do it as often as you can if you want to properly grow. 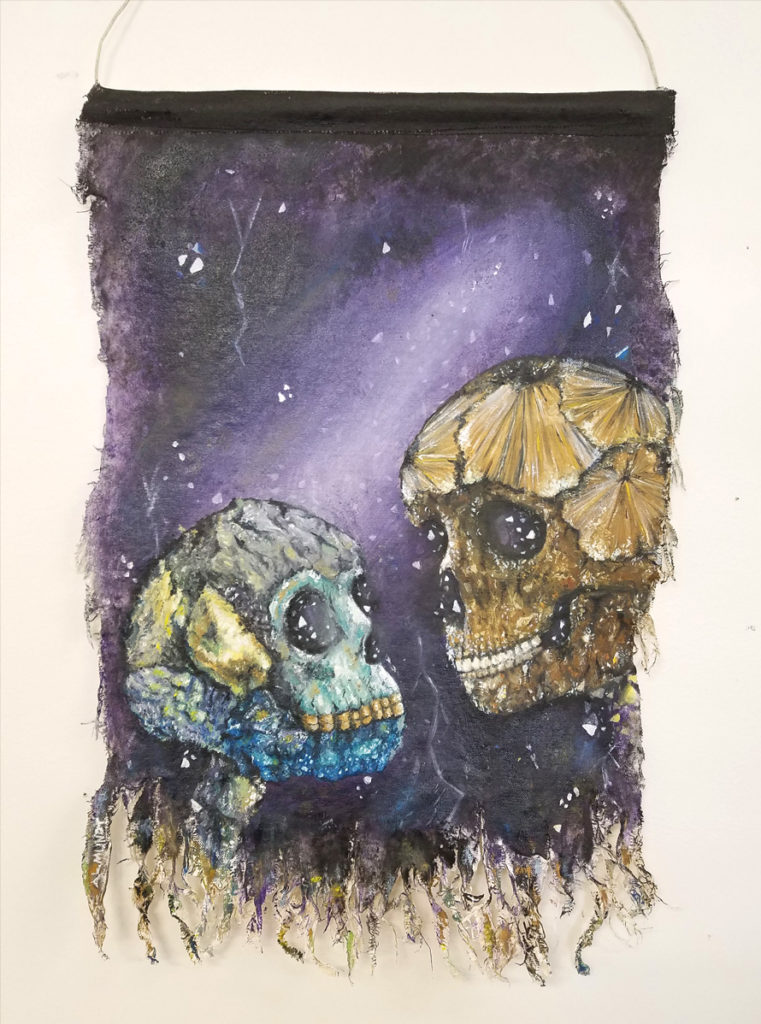